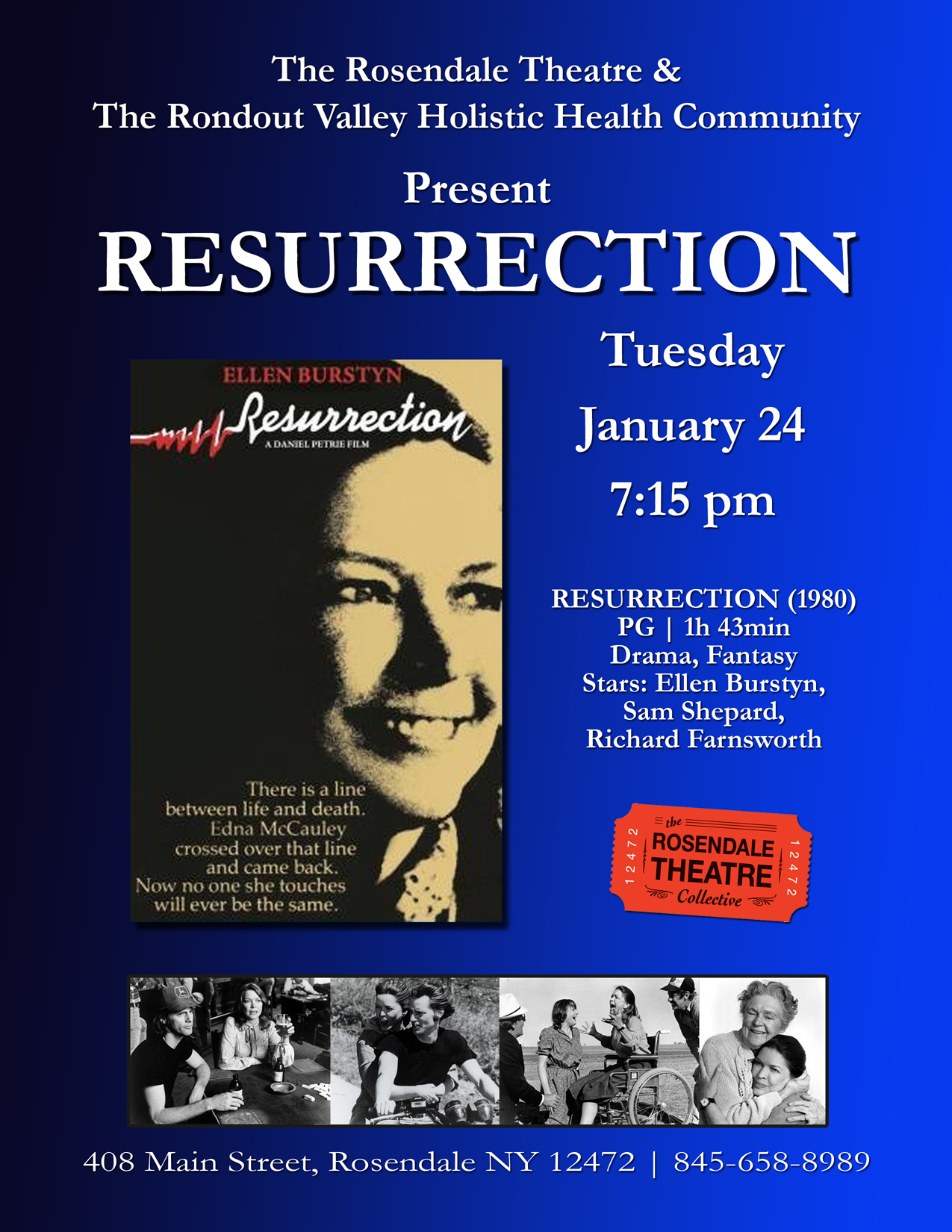 SYNOPSIS of RESURRECTION
Edna McCauley buys her husband a new car for his birthday. While the two are out driving, they have a terrible accident. Both are killed, but Edna, after seeing a great white light and a mysterious group of people, wakes up in a hospital. Apparently, she died, but has come back to life. She’s also suffered permanent spinal damage and must walk with braces and crutches.

Devastated, Edna goes home to Texas to recuperate, reuniting with her beloved grandmother Pearl and her hard, loveless father, John Harper. While at a family barbecue, Edna touches a little girl who has a serious nosebleed, seeming to stop the ordinarily serious bleeding with her touch. Edna actually feels the heat in her own hand. Grandmother Pearl tells her of a woman she once knew who, after a similar back from death experience, returned with the power to heal.

Edna touches her own crippled legs, gradually able to walk without braces or crutches. With her abilities becoming known, townsfolk bring Cal Carpenter, an attractive young man stabbed in a barfight, for Edna’s healing touch. She saves his life. Later, they become lovers.

It isn’t long before Edna’s healing people daily. But some feel apprehensive about her power, since it doesn’t necessarily involve preaching the gospel. Cal’s father, a zealot, even suggests her powers are satanic. Cal begins to fear her power, and he eventually walks out on her after an argument. Edna’s father John, accuses her of being a whore for sleeping with Cal, ordering her off his property.

Edna goes to a university, where two scientists want to study her abilities. She dazzles them with the strength of her gift, strong enough that she’s able to bend a beam of laser light. She also enables a severely crippled woman to walk again, taking the woman’s weaknesses into herself, then dispelling it – a dazzling display that nonetheless frightens Cal, who’s now so fearful of Edna’s gift it has rendered him impotent.

When Edna senses that her father John is dying, she goes home, standing at the dying man’s bedside. She wonders aloud what made him so incapable of love, reminding him of the abortion he ordered on her when she was a young girl. It left her sterile forever. She tells him she loves him nonetheless, and he dies after claiming to see the same bright light.

Once again, Cal fears her, thinking that she’s Jesus returned. Edna assures him that she’s not, but Cal, increasingly disturbed, takes a rifle, shooting at Edna as she talks to some followers in the country. He wounds her. After Cal is jailed, Edna decides to take off for parts unknown, saying farewell to Grandma Pearl, who understands that the power of love is Edna’s only true gift.

The years go by and Edna ends up a recluse, running a tiny gas station in the desert. A young couple pass through in their R.V. with a boy, Bobby, who’s dying of cancer. Edna talks to the boy, laying her healing hands on his cancerous body. Although they don’t know it yet, she has healed the child. The boy thanks her, but it is Edna, all too happy to express her gift, who thanks the child who has allowed her to heal him…